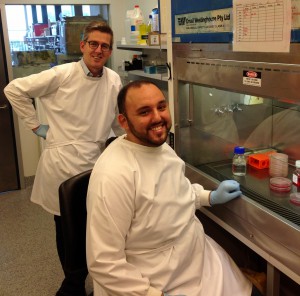 Professor Mike Ryan is leading a project to discover compounds that can treat mitochondrial disease (mito).  He is the head of the Mitochondria Lab at Monash University in Melbourne and a professor of biochemistry and molecular biology.  Professor Ryan’s lab aims to evaluate 10,000 therapeutic compounds in cell models, and identify ones that repair mitochondrial mutations.  The ultimate goal of the project is to develop a drug that improves medical outcomes and quality of life for mito patients.

In mito, genetic mutations lead to improperly folded proteins which prevent mitochondria from functioning correctly. Most mutations affect the mitochondrial respiratory chain, the group of proteins and enzymes that convert food molecules into usable energy for the body. The largest component of the respiratory chain is complex I. Defects in complex I are the most significant cause of mito, responsible for 35 percent of all cases. Accordingly, Professor Ryan will be using cell models with a complex I defect. 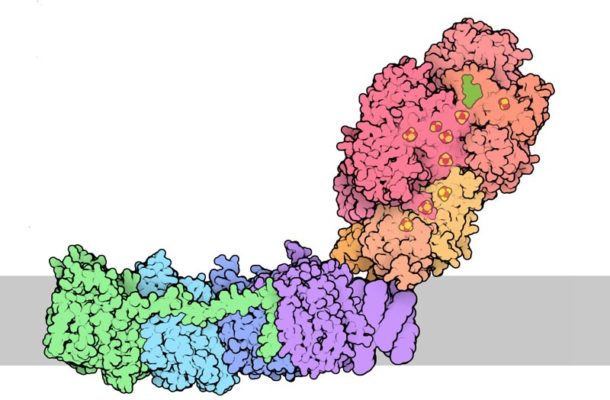 Figure 1: A depiction of mitochondrial respiratory chain complex I. Certain genetic mutations alter the shape of this molecule and prevent it from functioning. Professor Ryan’s research is seeking a compound that could stabilise complex I, and thus improve mitochodnrial function.   The grey band represents the inner mitochondrial membrane. Source: Wikimedia Commons, Protein Data Bank http://pdb101.rcsb.org/motm/144

Professor Ryan’s team has developed a method to rapidly test thousands of therapeutic compounds in a cell model. Using CRISPR-Cas9 technology, his team will edit the genome of cells to mimic an ACAD9 mutation, which disrupts an enzyme crucial for the assembly of mitochondrial complex I. This specific mutation has been reported in at least 30 known patients across the world, allowing researchers to compare cell model and real-life cases. Cells will be cultured in an automated system that enables a far greater number of compounds to be studied than could be manually. Ten thousand compounds will be analysed in this system, including 3,707 drugs approved by the US Food and Drug Administration, 89 epigenetic compounds, 276 kinase modulators, 928 microsource compounds, and 5,000 compounds.  Cells that survive will be rapidly identified using a robotic camera.

Professor Ryan’s team hopes to identify compounds that repair the cells’ mitochondria. He predicts that repair could occur by one of two mechanisms. The first mechanism is that a compound would act as a chaperone protein, which corrects misfolded proteins, allowing complex I to assemble.  Another possible mechanism is that a compound that would mimic the function of complex I, and thus compensate for its absence. Both mechanisms result in cells with improved energy metabolism. Compounds that repair defective cells will be tested in additional cells model, and then developed into drug formulation for use in mouse models and hopefully clinical trials.

At the moment, therapies for mito patients are limited. There are no approved compounds that address the primary cause. Professor Mike Ryan and his team at the Monash Mitochondria Lab are working to change this.  It is because of the Mito Foundation’s generous supporters that research like this is occurring in Australia each and every day.