Alana was born full term arriving abruptly in the front seat of the car on the way to the hospital (second child!). She was unexpectedly small weighing 2.175kg and was placed in the special care unit where she stayed for 6 nights. During that time, she struggled to feed well but passed all of her newborn screening tests.

Alana grew very slowly and in the first 7 months she struggled to put on weight, tolerate solid foods or meet key developmental milestones such as rolling or sitting.  She was a happy baby but it was becoming clear that this was something we needed to look into. Alana’s first paediatrician recommended that we ‘feed her everything’, something we knew was not going to work for her.  So we found a new paediatrician and started working through eliminating the most obvious causes. One of these tests flagged a metabolic issue and Alana’s case was passed on for genetic review. 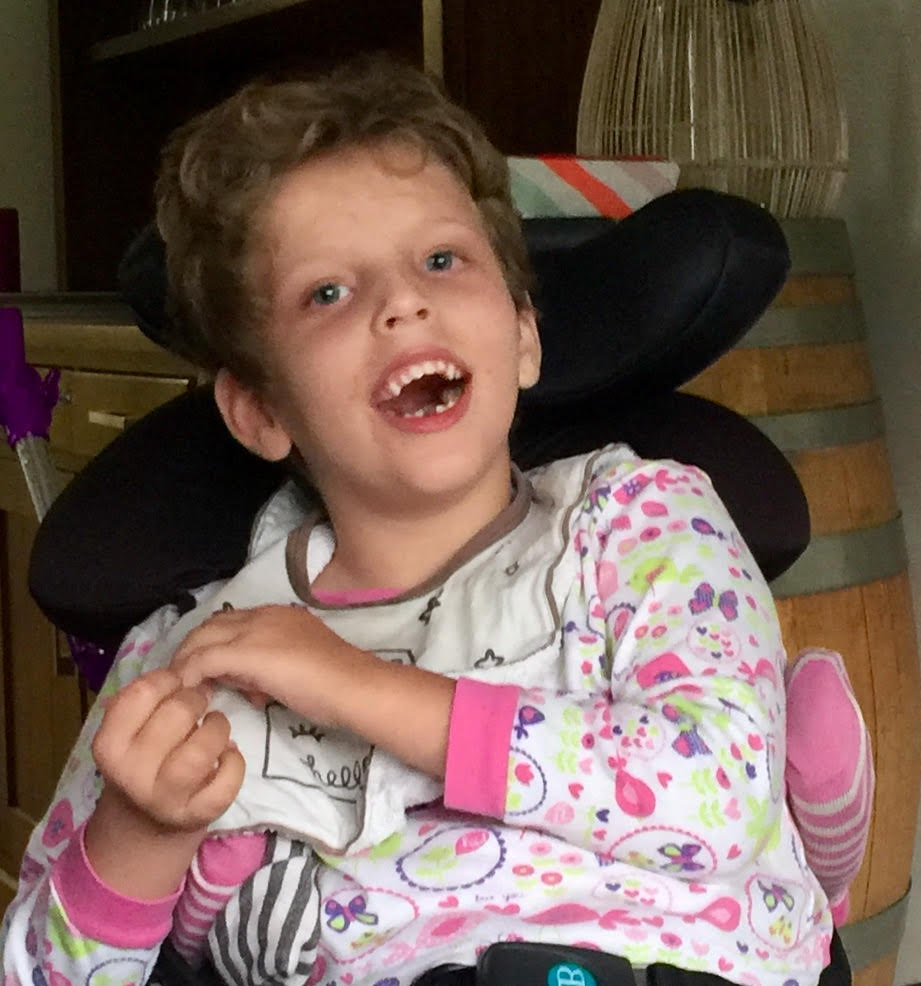 Alana was now nearly 18months old and this was the first time we had ever heard the term mitochondrial disease.  This triggered a series of invasive tests including MRI, lumbar puncture, muscle/liver/skin biopsies which all reinforced the likelihood of mito.  Alana was referred to a range of specialists – neurologist, speech & feeding, dietitian. Each time we were asked to detail what was going on, and we repeated the same thing over and over often with tears.

In parallel we were focusing on improving Alana’s weight gain and building her strength – she had very low muscle tone and her ability to eat solid food orally was declining. Alana was seeing a physio and OT and her feeding was under regular review but still wasn’t putting on enough weight. We were repeatedly encouraged to move to peg feeding but we were really reluctant to surgically implant the peg.  We tried feeding with a nasogastric tube – it was effective but the ordeal of reinserting the tube several times a day lasted only a couple of weeks before we said yes to a peg when she was 2 ½ years old.  For a kid who couldn’t do much on her own, she managed to effectively dislodge the NG tube every time we weren’t looking! The peg improved Alana’s food intake and she was making great steps forward with her unique version of commando crawling, pulling to stand and saying a few words.

But just before her 3rd birthday Alana started to have bouts of distress, vomiting up every meal and at times suffering from tremors all over her body.  We took Alana to emergency twice in one week demanding an EEG or any kind of help.  When we finally got (another) EEG, we were relieved to confirm that she wasn’t experiencing seizures but that the risk remained high.  We had great specialists but no one could offer any kind of reassurance or remedy.  We were terrified – our bubbly, cheerful little girl was clearly in distress and we had no idea what to do about it.

The genetic confirmation came just after Alana’s 3rd birthday after Alana participated in a whole genome sequencing research programme.  It took nearly 12 months to get the results, but we know that in many cases it can be much longer. The diagnosis was devastating.  We received a phone call from a new geneticist who confirmed that the genetic defect was on the SERAC1 gene and that was causing MEGDEL (3-Methylglutaconic Aciduria, Deafness, Encephalopathy, Leigh-like) Syndrome.  We were asked about plans to have more children, but were just trying to digest what we had been told.  It was a relief to have a name, something that explained what we were watching Alana go through, but it was also very frightening.  Google offered up one article from 2006 covering 30 patients worldwide and a very scary and alarming prediction of what was to come for Alana. It was a lot to take in and we made a conscious effort to refocus on the child we had right here right now.

As an outcome of her diagnosis, Alana was put on new medication which reduced the impact of some of her symptoms including dystonia, spasticity and reflux.  Once these settled down a bit, Alana started to retain food and began to grow quickly.  Alana was much more content but it was obvious that through her significant regression she had lost a lot of the skills she had worked so hard to get.  She could no longer crawl or talk and moving independently was getting harder for her. It was heartbreaking.

Since then, we continue to focus on independence and mobility with regular therapy and a long list of medications.  Alana’s symptoms are progressing and it took us many tests to realise that her hearing is deteriorating significantly.  The mainstream tests were inconclusive and Alana is very convincing in her way of engaging and communicating that everyone who knows her was completely surprised that her hearing was so bad.

Now 6 years old, Alana attends a fabulous special purposes school near our home and loves the challenge and support it provides.  Alana is unable to walk, talk or eat but she is growing and developing each day.  She is engaging, determined and clever, and pushes her body as far as it can go. As Alana grows, the list of enabling equipment grows and we are very thankful for each new milestone she meets.

Alana is now supported by a tribe of family, friends and specialists supporting her day to day needs and enabling her to do more and more.  We couldn’t do it on our own, and we will take every day we get with her with gratitude.

Sadly, Alana passed away in September 2020