Suzie and Kristan Georgiou's baby girl Dot was born in June 2019 after a completely normal pregnancy and delivery. At 9 days of age they noticed she felt very cold one night and rushed her to hospital, to have her go completely lifeless in front of them on arrival. After days of monitoring she was diagnosed as having hypothermia and allowed to go home, where they watched her closely, but thought the worst was over. She was the dream baby; she never cried, fell asleep in seconds in her bassinette, and fit in perfectly to complete their family of three daughters.

But over the next few months, Dot’s development was very slow. She was floppy like a newborn, barely drank, and was not meeting many milestones. She was admitted to hospital for some follow-up tests under the belief that her lack of energy from not feeding well was slowing her development. Three days into this hospital stay her parents went in for a meeting that changed their entire world, Dot was diagnosed with mitochondrial disease and were told her life was expected to be short due to it being discovered at a very young age, with such little abilities. They met the palliative care team, and Dot was discharged from hospital a few days later with a determined family prepared to only show her and her sisters, Elsie (6) and Hattie (3), happiness and love for her lifetime.

They called on their family and friends to follow their lead - be positive; show Dot smiles; allow the big girls time to enjoy their baby sister without worries; but ultimately prepare the girls slowly and kindly, with the help of the hospital staff, for what was to come. All three daughters' wellbeing was the highest priority. 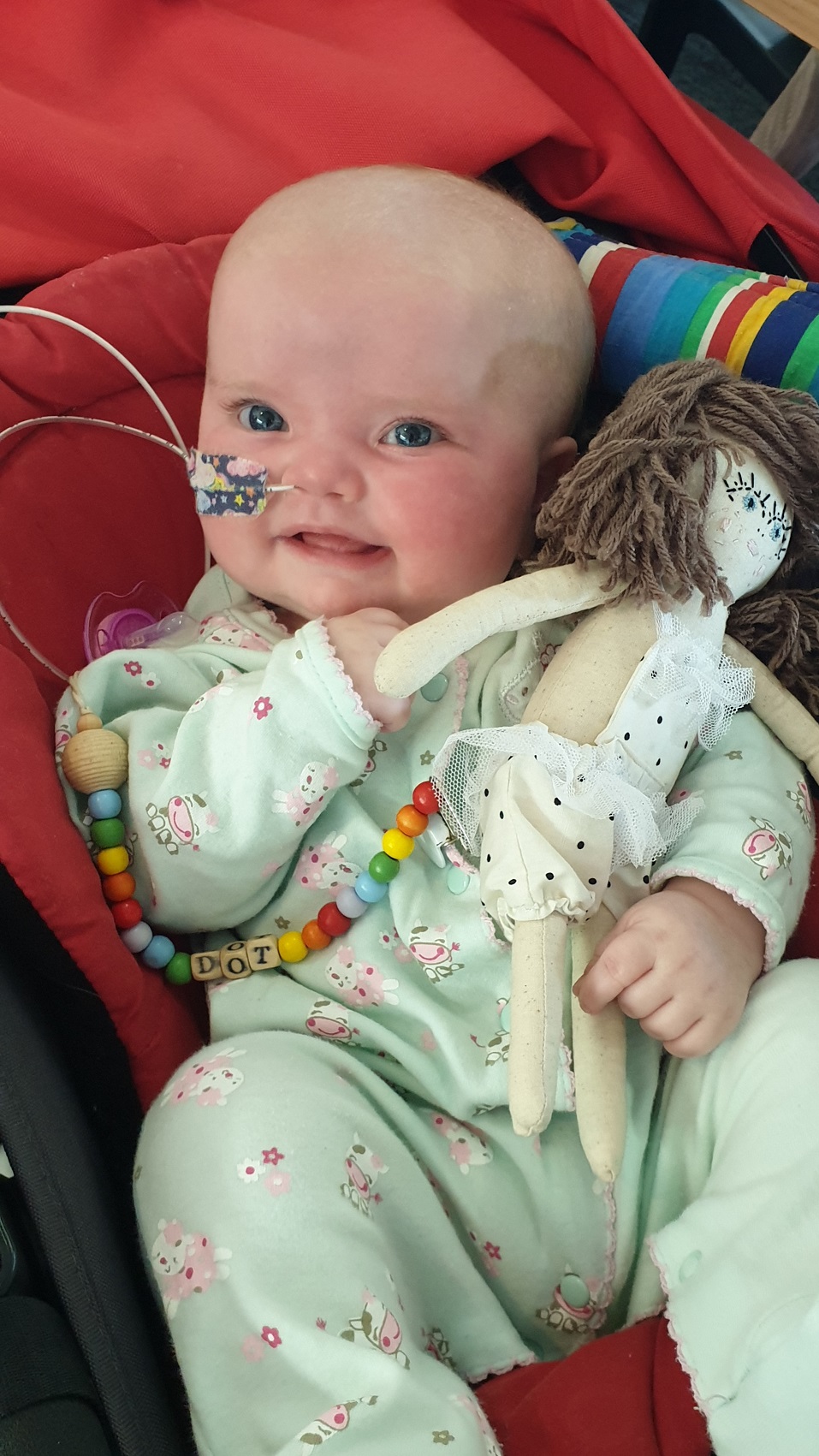 Upon arriving home, the family’s incredibly supportive community of Lobethal in the Adelaide Hills not only listened to their request of love but rallied around and entered “Team Dot” into The Bloody Long Walk in Adelaide in November 2019. Suzie, Kristan and Dot went along to cheer on all the walkers as they finished their 35kms. 64 people walked for Team Dot and raised over $30,000 to find a cure for mito in the hope that no other family would endure the heartache and fear the Georgiou family was going through. 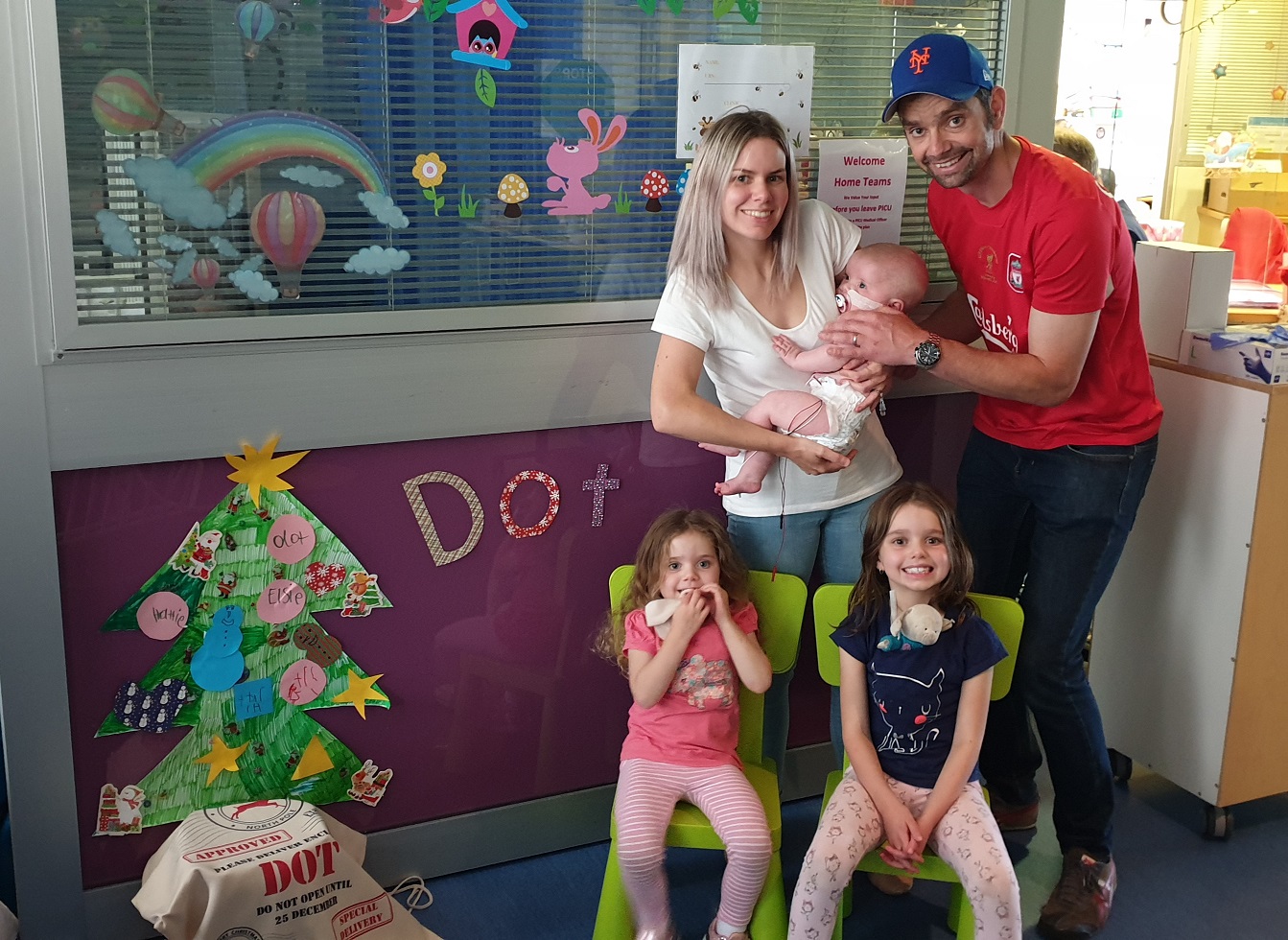 Whilst the Georgious shared family caravan holidays and focused on the positives of Dot with everyone, the reality of day to day for her was tough. She required feeding by a nasal gastric tube every 3 hours, day and night, and regular appointments with her Metabolics team at the Women’s and Children’s Hospital.

She remained floppy like a newborn and could not turn her head to one side, reach for a toy, swallow or give more than a smile or two a day. As the weeks went by she started to cry when being moved, leading to her being unable to be cradled and cuddled, with people needing to go down to her level to show her affection. 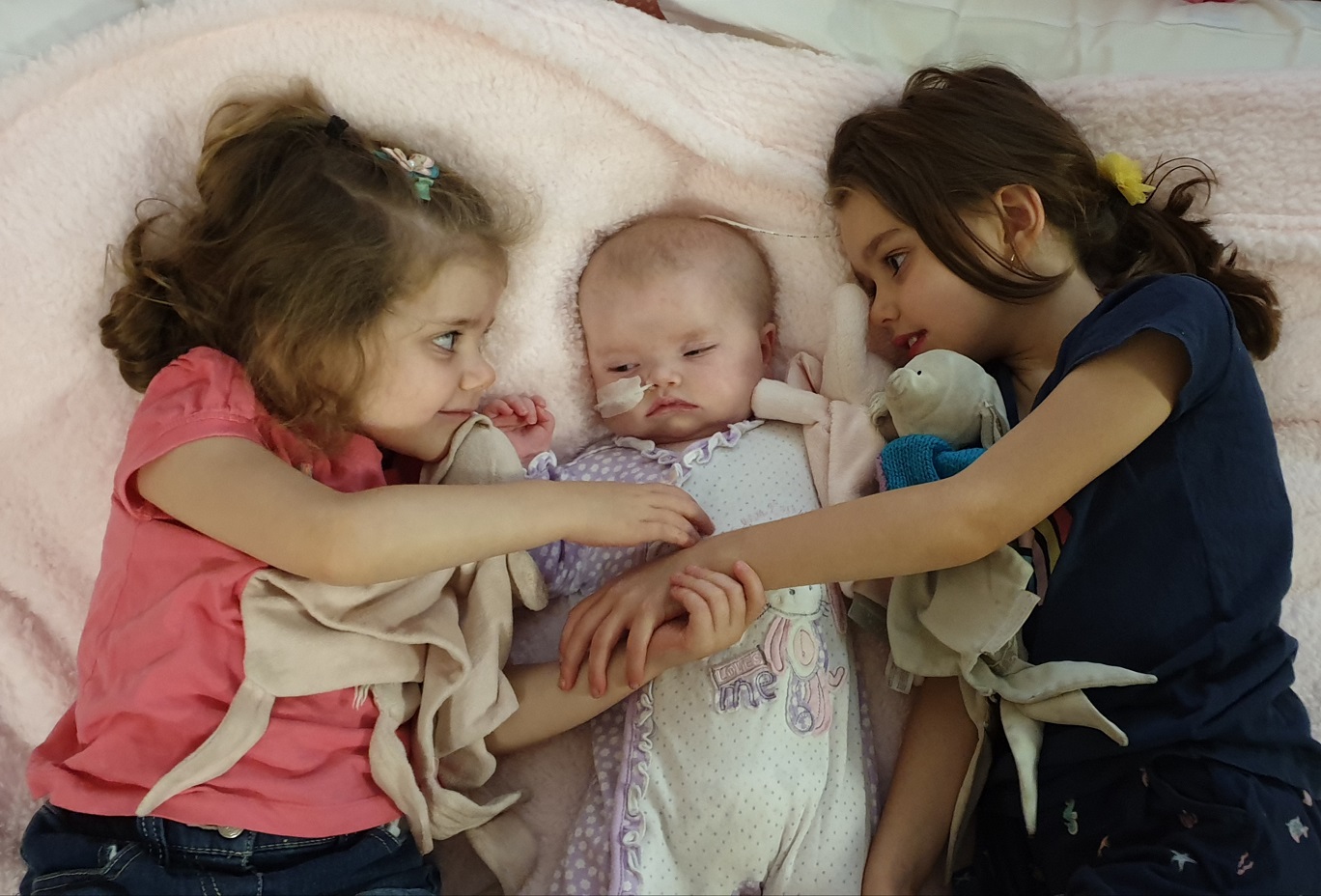 Transporting Dot started to become an issue as she did not like to be moved, then flopped forward in her car seat on certain inclines. So the doctors and NDIS were working quickly to try and get the family equipment and disability passes to keep up with her quickly changing needs.

The morning the Cudlee Creek bushfire tore through the Georgiou’s hometown of Lobethal, they were at the hospital being given the long-awaited test results confirming Dot had EARS2, a form of mito that approximately 14 people in the world have been diagnosed with. Whilst the uncertainty for their community and home brought huge unrest, the news of EARS2 brought the family joy that day with the prospect that Dot could possibly live longer. It was predicted she could either decline before the age of one, remain the same, or hit some little milestones – then upon reaching one year of age she would be at that stage for her lifetime. Her parents left that day with the gift of time for Dot, and to start to teach their older daughters about embracing life with a disabled sister.

The news was sadly short-lived. Unable to return to their home due to the threat of the bushfire, they stayed at Suzie’s mum’s house, and the very next morning Dot took a turn, went blue and stopped breathing. She was rushed to hospital for the very first trip of many over the next few weeks. Her seizures had begun, and the goal of reaching one started to slip away the very day after it was made. Dot would be in hospital for a few days then return home, only to be rushed straight back in, with her first Christmas being spent in hospital with a short day-pass out.

At her last hospital stay an MRI revealed the extent of the impact mito had already had on her brain and nervous system, confirming the heartbreaking reason why Dot stopped being able to enjoy cuddles. The Georgious along with the palliative team decided to take Dot home to be with her sisters, and medicate her to allow each of them some precious long-awaited holds. After fighting mito with all her little heart, sadly Dot died on 30 January 2020, aged 7 months.

Suzie says “I’m taking part in The Bloody Long Walk because I want to see a day where no other families have to go through what we have. To go into a meeting where there is literally nothing you can do. No medication. No cure. No operation to fix it. An amazing doctors team having to break this to you. I never knew such a cruel disease existed. We live in a world where there is a solution for everything, and to be told there isn’t just stung the most. But before we left the hospital, we decided to choose happiness and love, because no-one’s life should be about sadness, especially our Dot. And, our community not only listened, but they also turned around and created Team Dot to show us exactly how much love there is. Join Team Dot, walk or donate, and choose love too.”