Jorja-Rose Meyers was born prematurely at 32 weeks. She was a twin to her brother, Jayden Jon. Their arrival was long anticipated. However, we were not prepared for the roller coaster ride that followed.

Jorja-Rose weighed just 536 grams. She spent time in intensive care and surprised the paediatricians with her amazing progress. For the next four months Jorja kept up with her twin and was happy and healthy. However, over the next month, Jorja became floppy and struggled to keep her head up. She was almost lethargic.

We were referred to a specialist, but after many tests there was no diagnosis. We underwent genetic testing, which revealed our precious Jorja had mitochondrial disease (mito). We had never heard of it, so we were given a brochure. I felt helpless. I remember seeing ‘lifespan unknown’ written on the brochure. It was our worst nightmare. We saw the specialist again to understand more, but the disease was relatively unknown, so we didn’t get much information. I remember hearing that Jorja would not live to her first birthday. I remember walking out of the hospital and saying to my husband that we would fight this together, and I would still light her first birthday candle. I’m her mum and am meant to be able to tuck her into bed each and every night, read her a bedtime story, take her to her first day of kindergarten, take her to dance lessons, see her finish her schooling years, teach her to drive, buy her a wedding dress, watch her become a wife and a mother and so much more. How can this disease just rob her of all these things? 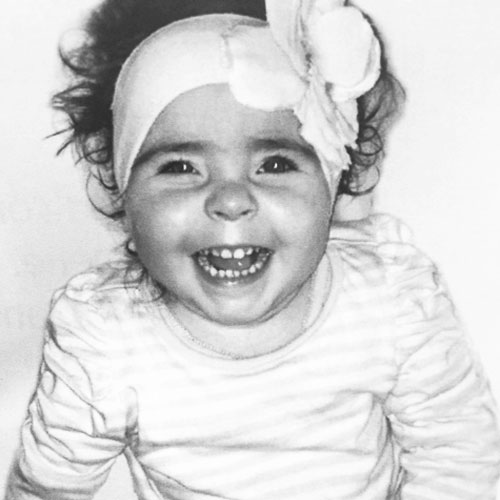 When I researched mito I learnt that there are many different symptoms. Jorja had at least six. She had good days, when people would say she didn’t look ill. I would tell them that you can’t see if a child has mito. It is called the invisible disease, but it was never invisible to us. We watched Jorja deteriorate. She could not swallow, and was unable to walk or talk. We always hoped that someday they would find a cure and we promised Jorja we would keep raising awareness and much needed funds.

One day, which I will remember for the rest of my life, I decided to stop the tears and become strong. All I knew was that I was prepared to fight for my daughter, and give her the best life we could. That was the day I became her eyes, her ears and her voice. We didn’t want anyone to know the seriousness of Jorja’s disease as we didn’t want them to treat her differently. She wasn’t different to us. She was our little hero whom we called ‘Poss’.

From the age of eight months until she passed away just four days after her fourth birthday our life became all about hospitals, and appointments with specialists. The impact this disease had on our family was extremely tough at times but without dedicated professionals and the love and support from our family, especially our parents, and friends we would not have been able to care for Jorja the way we did.

Jorja taught me to always believe that you can do anything you put your mind to. She was our little firecracker, always laughing and tormenting her brother and sister. She was an inspiration and was the life of the party. She never cried but used to cackle loudly. I think she just liked to show off and make sure people were looking at her. She changed my life as well as those she touched, and showed us the meaning of unconditional love. Now she is our angel.