Can you imagine knowing that your child was sick and not being taken seriously?

Imagine waking up to the sound of your eight year old daughter vomiting uncontrollably while semi-conscious. This is what happened to Dr Karen Crawley in 2007. Little did she know that her family’s nightmare was only just beginning.

Karen initially thought Kara had a bad case of gastro – she never imagined it would be her daughter’s first MELAS stroke. Mitochondrial Encephalomyopathy, Lactic Acidosis and Stroke-like episodes (MELAS), is a life-threatening form of mitochondrial disease (mito). 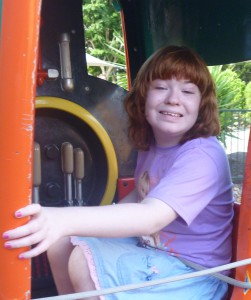 Before Kara’s first MELAS stroke she often vomited for no reason, had stiff muscles, stress incontinence, jerky eye movements, poor concentration and early loss of teeth. She failed an occupational therapy assessment and was slow at completing even simple tasks.

Mother’s instinct told Karen something was seriously wrong. With 10 years of experience as a GP, Karen still didn’t know what – nor did any of the other doctors she’d taken Kara to.

In her quest to find out what was wrong with her little girl, Karen went round in circles with many doctors, facing constant misdiagnosis and dismissal. She was met with little empathy, with one psychologist suggesting that Kara was simply lazy. In his ignorance of mito, another doctor blamed Kara’s spontaneous vomiting on the reflux she’d had as a baby.

Karen was even accused of being a bad mother. She began questioning her own ability as a mother and a doctor – why couldn’t she find an answer?

Mito can cause any symptom in any organ at any age. It is a hugely complex set of disorders. Diagnosis is challenging at the best of times and near impossible when faced with doctors who have little knowledge of the disease.

Karen had only heard of mito in passing 20 years before, in medical school. At that time it was considered such a rare disease that it didn’t warrant time on the curriculum. Karen now believes that if she had been taught about mito at medical school or as part of her continuing education, she could have pieced together Kara’s many seemingly unrelated symptoms.

Mito is no longer considered rare – one in 200 Australians carry the genetic mutations that put them at risk of developing the disease.

Many patients are misdiagnosed and therefore mistreated for years, simply because of the lack of education about mito within the medical profession.

Increased awareness will help sufferers gain earlier diagnosis and access to specialist care sooner, having a life-changing impact on patients.

Over the past eight years, Kara has faced a slow deterioration in nearly all of her systems. Kara is now wheelchair bound, suffers dementia, is fed through a tube, has hearing loss and limited vision. Mito has robbed her of her fine and gross motor skills, coordination, balance and muscle strength. She is fully dependent on being fed and bathed.

She has knocked on death’s door many times, but has somehow had enough strength to recover each time and return home to her family.

No one can predict the precise path of a MELAS patient, but with the disease taking hold in childhood, Kara’s time is limited.

In between caring for Kara, her role as a GP and being mum to her two other children, Karen used to run the Mito Foundation Helpline as a volunteer. With her medical background and personal experience, Karen was an invaluable support to countless sufferers, their families and medical professionals.

Karen’s ability to give to others, while mito destroys her beautiful daughter, is remarkable.

Karen said, “Every now and then we see glimpses of brilliance in Kara and can’t help but think of her lost potential. She wanted to try everything, read everything and help everyone.

“Now, with a few years at most to live, our gorgeous girl is disappearing.

“Mito leaves families isolated. The physical disabilities mito causes, coupled with the overwhelming fatigue, makes even leaving the house challenging. People (and even many of my medical colleagues) generally do not understand the nature of mitochondrial disease nor can barely say the word.

“As many mitochondrial diseases are progressive and hence fatal, the family watches their loved one deteriorate over years or maybe decades, and often multiple family members are affected. It is a path even us as a family barely understand, a path that takes away all their basic skills, leaving little for your child to enjoy.

“As a maternally inherited disease, I might be the beginning of the story, but Kara is not the end. My two younger children have the same gene, with my son starting to show signs of fatigue and weakness…”