It was a day just like any other, yet this day will stay with me forever! It was Wednesday 23 March, 2011. I had not long gotten home from school when mum drove off to see the doctor. She returned and told dad in an excited voice, “Cricket training can wait, the twins are coming early!” You should have seen the look on dad’s face. What happened next turned our whole family upside down…

Mitochondria is a word not familiar in most people’s homes, however, this word has gripped our family. There are many different mitochondrial diseases and they are an inherited chronic illness that can present at birth or develop later in life. It causes debilitating physical, developmental and cognitive disabilities with symptoms including poor growth, lack of muscle tone, loss of muscle coordination, muscle weakness, dystonia, pain, seizures, loss of vision, hearing loss, gastrointestinal issues, learning disabilities and organ failure. It is where the metabolic system in our body is unable to produce the energy it needs, “Energy for Life”!! 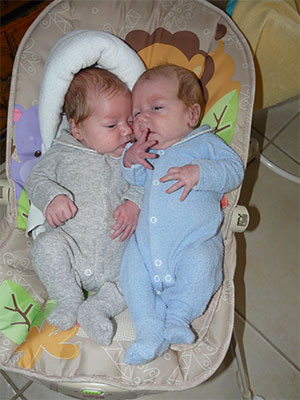 It is estimated that one in four thousand people have this progressive disease with no cure. Unfortunately this was the case for my twin brothers who had Fumerase Deficiency, an exceptionally rare mitochondrial disease. Lachlan and Riley were numbers six and seven in Australia to have this particular disease, with just over one hundred cases worldwide.

They were premature and not feeding properly so they spent fifty one days in the Special Care Unit at St Vincent’s Hospital. During that time no one suspected anything was seriously wrong with the twins, always putting the poor feeding and lack of muscle tone (being floppy) down to being premature and reflux.

After struggling at home for nearly five months, mum and dad took the boys to Brisbane to see a Paediatrician as they were showing poor signs of development. The paediatrician wanted them to go into hospital for feeding therapy but Dad said no. Around six weeks later the boys were admitted to the Mater Children’s Hospital in Brisbane to run tests on them and within a week mum and dad knew they were terminally ill with an unknown time frame.

The boys were in hospital for a total of four weeks, two of those weeks they were at the Mater Children’s Private Hospital and mum, dad and Addison would go most days of the week and I would only see them on the weekend because of school. It was much easier to visit them when they were transferred to the Base Hospital in Toowoomba for the remaining two weeks.

While admitted in hospital it was discovered they had no suck/swallow reflex so every time they drank milk it was like they were chocking, so they were tube fed for the remainder of their lives. This is where someone (dad) puts a tube down their nose into their stomach and by attaching this to the pump it would put milk through the tube into their stomachs. This was the only way to feed them. The boys had limited eye sight, were unable to lift their heads and struggled to move their limbs so all they could do was lie in their rockers or in their bed. They did enjoy cuddles from us though.

In January 2012, we went for a respite weekend to Caloundra, so the twins were admitted into the Base Hospital for the weekend. We had a nice relaxing day at the beach on the Saturday and Sunday morning we went for a swim before heading home. Just after breakfast we received a phone call from the hospital to say that Riley had passed away. As soon as we got back in Toowoomba we went straight to the hospital to see Riley. Riley was ten months old.

After we lost Riley, mum and dad came up with doing a little bucket list for Lachlan.
His bucket list was things such as motor bike riding with Dad, driving in the tractor, BBQ at Glenlyon Dam, bushwalking at Girraween National Park and shearing Uncle Andrew’s sheep. Lachlan was able to hold on until Dad’s birthday in June two thousand and 12 and it was later that day on our way home from Inglewood he passed away too. Lachlan was 15 months old.

During/after all of this, mum and dad decided to do genetic testing on the twins and themselves and we are lucky to have my little brother Liam who will be three this year.

This experience has changed my life by knowing how special life is and that it can be really short.

This experience has touched me deeply because I now understand what it is like to watch someone you love suffer and I feel for all of the other people/carers who have or are still living with any type of disease.

I have decided to talk about my family’s experience with mitochondrial disease to help raise awareness of this incurable and horrible disease.