November 1, 2013, Levi Arthur Jones entered the world in a flurry with an emergency C-section after an induced labour failed to progress and Levi went into distress. I got to look at his sweet face while I was being stitched up then they whisked him away to the special care nursery. Five hours later, shortly after midnight, they brought him to my room and I got to spend a few minutes with him before they took him back. Levi struggled to feed at first, his first feed was through a bottle in the nursery, even that was hard for him and they had considered a nasogastric tube. It took five days to get Levi to latch properly to be able to breastfeed, then we were able to go home. No one noticed anything different about him and we all assumed he was a healthy baby boy.

Whilst in the hospital after birth Levi had failed the newborn hearing screening twice and was referred to the children’s hospital for an ABR test where they run sounds into the child’s ears while they are sleeping and record the reaction through monitors on their head. At three weeks old he was diagnosed with a mild to moderate hearing loss and referred to Australian Hearing to have his hearing aids made. I was so sad for my poor baby to have to go through this. There was no history of hearing loss in the family.

Levi was never really settled as a baby, he barely slept and I felt like I was feeding him every half an hour. By six weeks I’d seen two different doctors about why he was always screaming. The first said it was colic and the second took the health nurse’s word that it was reflux and prescribed Losec. At seven weeks I took him to the children’s hospital and tried to explain that he screamed so much all the time but they told me there was nothing they could do. I tried telling everyone that something wasn’t right. He barely slept and when he did he had to be held and he would wake after around half an hour. His screaming fits would go on for hours and hours. I would call my mum in tears, I had no idea what to do with him. 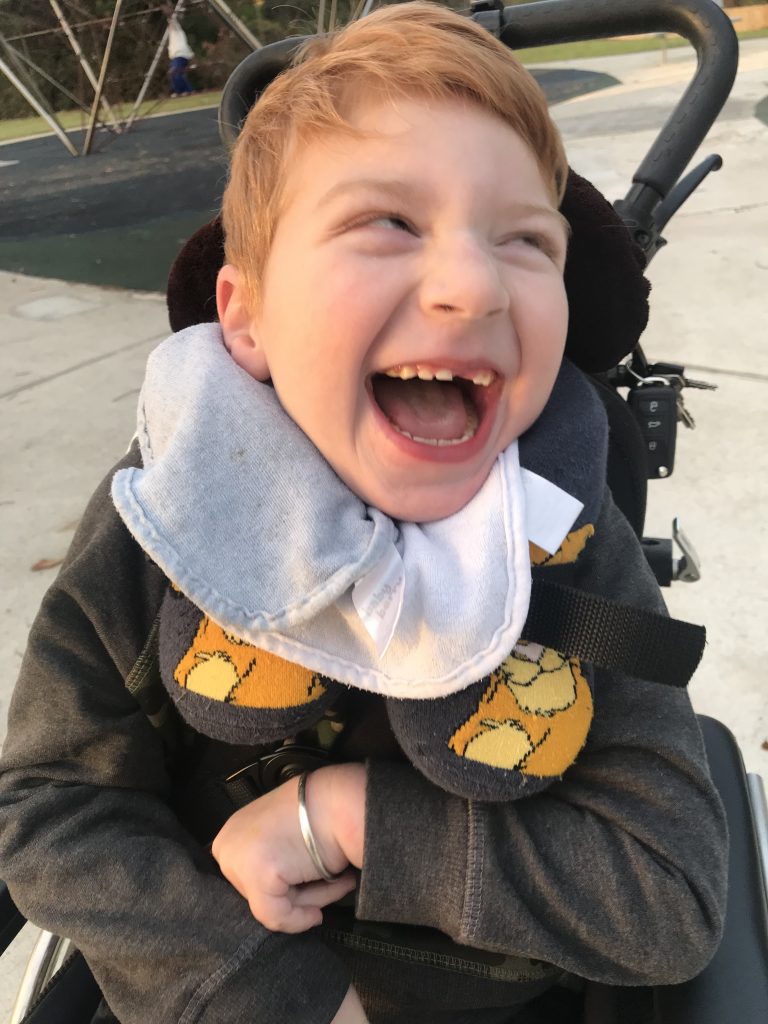 When he was three months old I couldn’t take it anymore. He had screamed for four hours straight through the night and I was so tired. I had tried to do a small grocery shop and a noise woke him and he was set off again. I drove straight back to the children’s hospital, picking my sister up on the way for support. It was such a blur when they started saying things like he’s too floppy and his eyes aren’t focusing. He had been five kilos for a whole month so they put a nasogastric tube in straight away. The doctors were discussing whether they wanted him admitted or would bring him back as an outpatient for testing. They went with admission. It was midnight by the time Levi was taken to the ward. The nurses on the ward told me to pump a feed for him and go sleep, they would take care of him for the night. I woke around 6am and walked out of the room to be greeted by the sounds of his screams. I found Levi in a nurse’s arms covered in monitors, screaming. The nurse’s words were “how have you been doing this for so long?” I will never forget it. He’d screamed all through the night.

Over the next 10 days he was fed top up feeds through the nasogastric tube. I met specialist after specialist. He had every test under the sun, CT scan, lumbar puncture, MRI of his brain, bloodwork just about every day. They had ruled out everything they were looking for so we had no answers, only more questions. Just before Levi was discharged he was started on Gabapentin which significantly improved his moods and he was able to sleep longer than he had ever before.

Levi now had a team of specialists - a physio, OT, speech therapist, neurologist, ophthalmologist, paediatrician - and I had no idea what the hell was going on. By six months of age, Levi had lost the ability to suck so he was solely tube fed. For a long time, I tried to feed him purées and he was doing well for a period of time. Eventually he was taking less and less orally until he got to the point where if anything touches his tongue he will gag and vomit.

At 19 months old Levi had a g-tube placed and a skin and muscle biopsy for further testing. At this age he could not sit, roll, crawl, talk or walk. He still wasn’t very settled and would have long moments of screaming and crying. I had to wrap him and rock him to sleep until he was around 3.

Eventually the muscle biopsy came back just after Levi turned 2 to say that Levi has mitochondrial disease due to complex IV deficiency. I still had no idea really what this meant. He was started on a cocktail of vitamins to boost energy levels and encourage cell reproductions. Levi’s little brother, Aubrey, was born when Levi was 17 months old. He was perfectly healthy and unaffected by this disease.

Whole genome sequencing was done to find the genetic cause for Levi’s condition. It took 2 years to get the results. PNPT1. 4 letters and a number that doesn’t make a whole lot of sense but they’ve stripped my little boy of the “normal” life he deserves.

Now Levi is five years old and in preprimary at our local special needs school. He is wheelchair bound, unable to walk, talk or eat but he has a smile and a laugh that could light up the whole world. He is thriving thanks to everyone who loves him and puts in the hard work for him. He loves school, he is determined to show the world what he is capable of.

As healthy as he is now the threat of this horrible disease creeps to the front of my mind constantly. Illnesses can knock him down so suddenly so I do everything I can to keep him healthy. We never know what tomorrow will bring or how long we will get to enjoy his beautiful, happy energy so we make the most of now. Tomorrow can wait. We have a life to live today.