Noah was born prematurely at just 29 weeks. At a young age, Noah began to suffer from symptoms, including failing to thrive and stroke-like episodes. My husband Mark and I fought to find a diagnosis that would explain what was happening to our son.

As months turned into years and Noah underwent test after test, including invasive muscle biopsies, he was incorrectly diagnosed multiple times. Noah’s biopsy results suggested he didn’t have mitochondrial disease (mito) – but what he had, nobody knew.

As Noah’s condition progressed with frightening speed and his unexplained symptoms increased, doctors actually became more reluctant to help. Some suggested that if we would never know, what was the point looking for answers? There is nothing worse than feeling helpless as a parent and having nowhere to turn. At best, we were given sympathetic looks and nods from doctors. At worst, one doctor told us that he would see him again in a year if he was still alive. 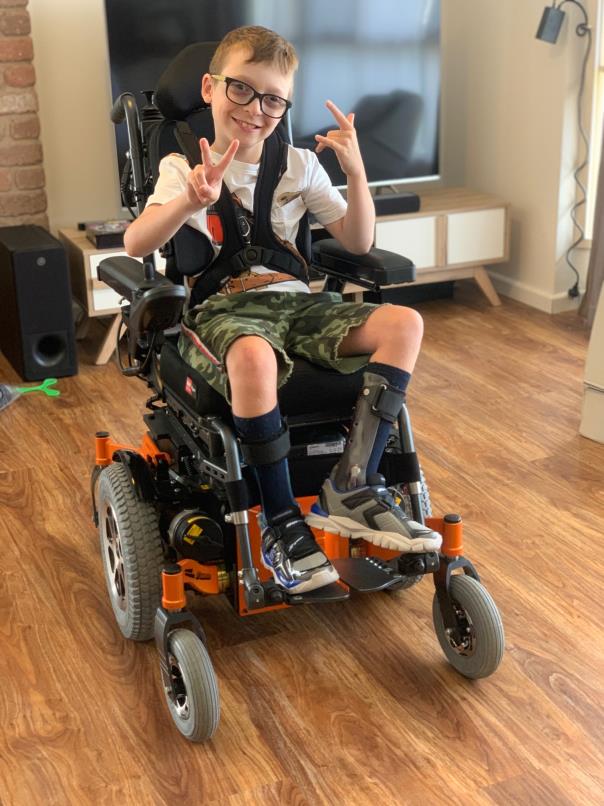 At the age of five, Noah was given finally a diagnosis of mito. Nothing can prepare you for being told your baby has mito, but at least with a diagnosis people wanted to help us. We have the most amazing medical team around us now.

Noah is now seven. Along with mito, Noah suffers from a number of other rare diseases. Noah only has 11 safe foods and is fed through a tube 24/7, which is inserted directly into his stomach. Noah has experienced multiple stroke-like episodes which occur without warning. Each stroke has caused significant brain damage, including to his brain stem. It was recently discovered that Noah had a lesion in his spine which meant he has lost the use of his left leg. His muscle also wasted in just weeks, which we can’t explain yet. The unknown is the hardest part of mito for so many people.

Despite everything Noah has been through, he is always smiling…and trying to make others smile. He loves Star Wars and our lounge room floor is covered in lego. He’s building a hospital at the moment complete with MRI and operating rooms, and hopes to be a brickmaster one day. He’s a got a big heart and loves to zip about on his wheels and make grown-ups gasp as his stunts! Ask him how he feels he says, “I choose to be happy.”