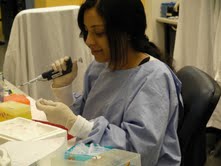 Mitochondrial respiratory chain (RC) disorders are among the most common inborn errors of metabolism with an estimated incidence of 1 in 5,000 births. Mitochondrial RC disorders may arise from mutations in either nuclear or mitochondrial DNA, increasing the complexity of inheritance patterns and diagnosis.

Children with a RC disorder whose parents are consanguineous are very likely to have an autosomal recessive pattern of inheritance. Identification of mutations responsible for these disorders would greatly improve the accuracy and usefulness of genetic counselling, and give an understanding of their pathogenesis which may assist the development of effective therapies.

RC disorders can affect any organ and definitive diagnosis usually relies on detection of altered activities of one or more of the RC complexes. However many mitochondrial RC disorders display tissue specific manifestations, where deficiencies can be detected in muscle or liver but do not manifest in fibroblasts. For patients with muscle specific RC defects, forced myogenesis i.e. transdifferentiation of patient fibroblasts into muscle cells using a MyoD lentiviral vector would prove as an useful research tool, such that functional assays could be performed in cell types known to be affected by the disorder. These studies will also establish whether forced myogenesis of cultured CVS could be of value as an aid to prenatal diagnosis.

Minal commented, “My interest in mitochondrial (mito) research initiated in 2009 when I was working as a research assistant with Professor John Christodoulou. I realised that despite being such a common disorder, one of the main challenges remains in establishing a genetic diagnosis. Lack of understanding of the disease and delays in diagnosis, may contribute to progression of symptoms. This adds to the distress of families dealing with the trauma of a severely ill child or family member. Thanks to the generous scholarship from the Mito Foundation, I was fortunate enough to pursue my PhD in this field which was very intriguing to me. The Mito Foundation not only supports my research but has also funded my travel to several international and local conferences which allows me to present my work and hear the latest about what is happening in the field in other countries”.

Minal’s research “Gene discovery and functional studies of the mitochondrial respiratory chain disorders”aims to elucidate the underlying genetic and pathological mechanisms in mitochondrial disorders, and make diagnosis more robust and accurate. They work with several families where the genetic cause of mitochondrial disorder is unknown. Using the relatively new and powerful technology of next generation sequencing (NGS), they try to uncover the genes which could be causative. They then go on to assess the pathogenic nature of new disease candidates on mitochondrial biology using a range of laboratory based functional studies. A genetic diagnosis is invaluable for genetic counseling, expanding the reproductive decision options for the families, including prenatal diagnosis for subsequent pregnancies and pre-implantation genetic diagnosis. Recently using NGS technology the rapid genetic diagnosis of a 5-year-old girl with Leigh Syndrome facilitated her inclusion in Edison Pharmaceutical’s phase 2B clinical trial of EPI-743, a therapeutic drug for Leigh disease.

Their research has translated into paper published in the American Journal of Human genetics titled “Mutations in CYC1, Encoding Cytochrome c1 Subunit of Respiratory Chain Complex III, Cause Insulin-Responsive Hyperglycemia“. This work was undertaken in collaboration with a research team in Perth led by Nigel Laing and Mark Davis, who also had financial support from the Mito Foundation. Access to this technology was a major factor contributing to the success of this work, and NGS is a major advancement for researchers in the mitochondrial field.

Minal is one of four PhD Scholars supported by the Mito Foundation through donations. It is hoped that her work will have a significant impact on people suffering from mito.