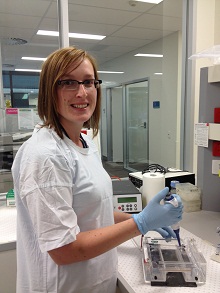 In Australia, on average, one child a week is born with a mitochondrial disorder. For many of these patients the underlying genetic cause has not been found. This can leave families desperate for answers and without knowing what ‘risk’ they have of having a second child with the same disease, and never knowing what has caused their child’s illness.

Hayley’s PhD project uses a new gene sequencing technique called Massively Parallel Sequencing. It has allowed us to investigate over 1,000 genes encoding all the known mitochondrial proteins (or the ‘MitoExome’) at the same time, in each patient, to look for DNA changes that may be the cause of their particular mitochondrial disorder. Massively Parallel Sequencing produces huge amounts of data, which require a large amount of analysis and follow up work to get a definitive result. Hayley’s role is to confirm some of these DNA changes that were identified by the ‘MitoExome’ project, and to look at the effect of the altered protein in patient cell lines and tissue.