Let me tell you a story about our daughter.  Miranda Margaret Kirk is a beautiful, tenacious, stubborn, ten year old girl.  She has one of the many forms of mitochondrial disease (mito).   Her body cannot synthesise carbohydrates, so her body cannot produce the energy it needs to grow and function.  This has resulted in developmental delays, mobility problems, sight and hearing issues, and will most likely impact on her length of life.  But this is not her whole story . . .

Miranda was born in March 2006.  Within the first year, she was ‘failing to thrive’.  By the time she was eating solid food, she would fall asleep at the table, and she wasn’t gaining weight or developing any muscle mass.  She was suffering ‘night terrors’ or seizures up to four times a day.  She developed droopy eyelids and tests showed that she had progressive deterioration in her vision. 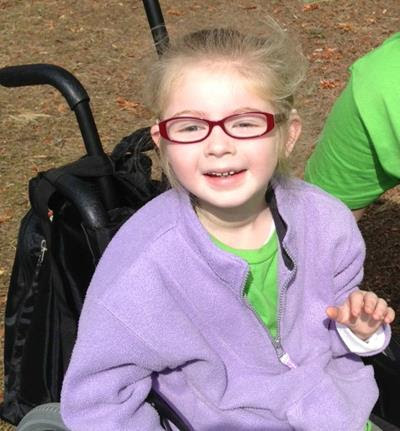 The course of action was tests, tests and more tests. The approach seemed to be to find out what she did not have and work through the list of possibilities. As parents, we just knew something was wrong, but for four years, we lived with uncertainty and frustration, having well-meaning people telling us that she was just small and that we were being over-sensitive. We questioned and doubted ourselves, and doctors admitted that they just didn’t know what was wrong.

In May 2010, Miranda had a muscle, bone and kidney biopsy. We got the test results in October 2010 – Miranda had Mitochondrial Disorder Complex 1. It isn’t unusual for it to take months to get results. Mitochondria are complex things, so here is a quick biology lesson. Mitochondria are present in nearly every cell of our body and each has around one and a half thousand genes. Their role is to convert the food we eat into energy – they are effectively the batteries that power our body. Mito occurs when there is a fault in one or more of the genes. Mito affects parts of the body where energy demand is greatest, including the muscles, brain, heart, liver, kidney and respiratory system. Some mito disorders affect a single organ, but most involve multiple organs with nerves and muscles being affected the most. So the severity of disease (and over 100 variations have already been discovered), depends on the percentage of mitochondria affected and their location.

Miranda’s muscles, brain and heart are affected. Her body’s attempt to convert carbohydrates into energy causes the production of lactic acid, so Miranda started a special diet, low in carbohydrates and high in fat and protein – meat and McDonald chips are her staple! She put on a little weight and could walk up to twenty five metres. In December 2012 she was fitted with a gastronomy tube, and has put on much more weight. At eight years old she weighed sixteen kilograms. She no longer has seizures and her muscle mass has improved. Her eyes have stabilised, but she has developed hearing issues, wears hearing aids and will probably need a cochlear implant in the next couple of years.
Despite all this, Miranda is a tenacious, stubborn, bossy little ten year old. She is in Year 3 at a mainstream school and, whilst she will never be a brain surgeon, she is a bit of a celebrity – she doesn’t remember everyone’s names but she will allow them to play with her! She can now walk up to 800 hundred metres. She wears an AFO (Ankle Foot Orthosis) on her left foot to help her walk and to stop her falling so often when she doesn’t have her walking frame.
It took us four years to get a diagnosis for Miranda. They say ‘knowledge is power’ and an early diagnosis would have been a powerful thing to have. We hope that the future brings increased knowledge and understanding of genetic conditions, so that children like Miranda will be diagnosed much more quickly. Whilst there is currently no cure, Miranda’s diagnosis at least enabled us to begin treating her symptom and slow their progression.

This is Miranda’s success story. Her condition is progressive, and will probably limit the length of her life, but every little improvement, however small, means a great deal to Miranda and to us. We have quite a journey ahead.