The Crawley family, who live in his electorate, have been devastatingly affected by mitochondrial disease (mito), and Mr Morrison has provided support to them and our cause.

The foundation thanks Mr Morrison for his ongoing support of both the foundation and families affected by mito.

“Supporting medical research to improve diagnosis and treatment and, ultimately, find a cure for mitochondrial disease, as well as helping the people and families affected by this debilitating disease, is vitally important work.” Watch Scott Morrison highlight the work of the Mito Foundation (incorporated as the Australian Mitochondrial Disease Foundation – AMDF) and Stay in Bed Day. Watch Scott Morrison’s tribute to Kara Crawley who lost her battle with mito. Mr Morrison spoke in the Federation Chamber. 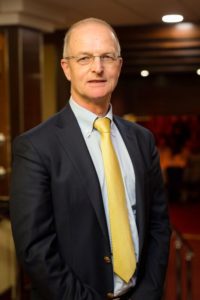 Professor Sir Doug Turnbull is the Director of the Wellcome Centre for Mitochondrial Research. Professor Turnbull’s focuses on understanding the molecular mechanisms underlying the neurological features in patients. With colleagues he is searching for new therapies for patients and he has been actively involved in work to prevent the transmission of mitochondrial DNA disease using an IVF technique called mitochondrial donation. “Mitochondrial diseases are becoming increasingly recognised as an important cause of human illness. From their recognition barely half a century ago, they have been recognised as a cause of human diseases affecting many organ systems at different ages. Our knowledge of this area increased enormously firstly through the application of biochemical techniques to delineating respiratory chain deficiencies and in recent decades in the genomic age through the identification of mutations firstly in the mitochondrial then in the nuclear genome. With this increased understanding of causation, work is going on around the World looking at developing effective treatments. In addition to their role in relatively uncommon but important genetic illnesses, mitochondrial dysfunction probably has a role in many of the commoner neura-degenerative diseases and may well contribute to human aging. Research in Australia and around the World continues on these important questions.”